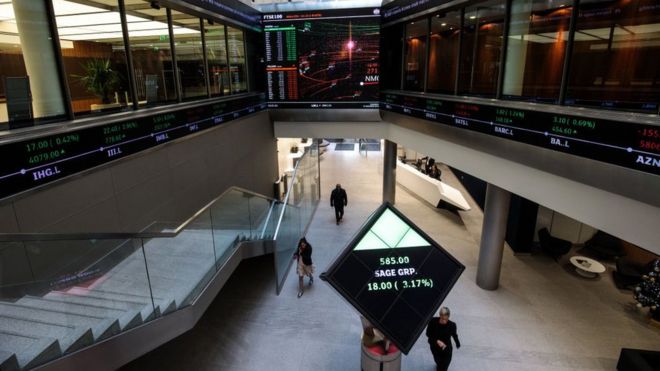 Markets in Europe fell on Thursday after a warning from China that it would take fresh countermeasures against US tariffs.

The sell-off follows a turbulent day on US and Asian stock exchanges, fuelled by investor fear of a global recession.

As a result, the three main US stock markets closed 3% lower overnight and European stocks fell across the board, while the Nikkei closed 1.2% lower.

On Thursday morning, most European markets stabilised somewhat, but then fell sharply after China's Ministry of Finance said the US intent to impose fresh tariffs violates a consensus between Presidents Trump and Xi.

It said that China will "have to take necessary countermeasures" against US tariffs.

Earlier this month US President Donald Trump delayed imposing tariffs on some imports from China until 15 December in part to avoid hitting US shoppers this Christmas.

"The tentative market recovery in Europe has not held," he said.

"As we indicated earlier, this was always a very precarious bounce and it has died a quick death."

Wednesday's retreat by investors was triggered by tremors in bond markets, which were interpreted as a warning sign of a possible recessions in major economies.

The yield on two-year and 10-year Treasury bonds inverted for the first time since June 2007 as investors dived into the longer-term investments.

This meant investors were willing to get lower returns for holding bonds for a longer period in return for an investment they believed was safer.

Usually investors want higher returns for holding bonds for longer, because of the risks involved.

Historically, such bond movements have been a reliable indicator of possible recessions. For example, they preceded the last big global downturn more than 10 years ago.

The UK bond yield curve also inverted for the first time since 2008, while the yield gap between 10-year and two-year German government bonds was at its tightest since the financial crisis.

Trade tensions between the US and China have weighed on stock markets for at least the past year.

But speaking to the BBC's Today programme, Kathleen Brooks from Minerva Analysis said the sell-off may have had a simpler cause.

"It's also August," she said. "People are away, so moves can be exaggerated in August."